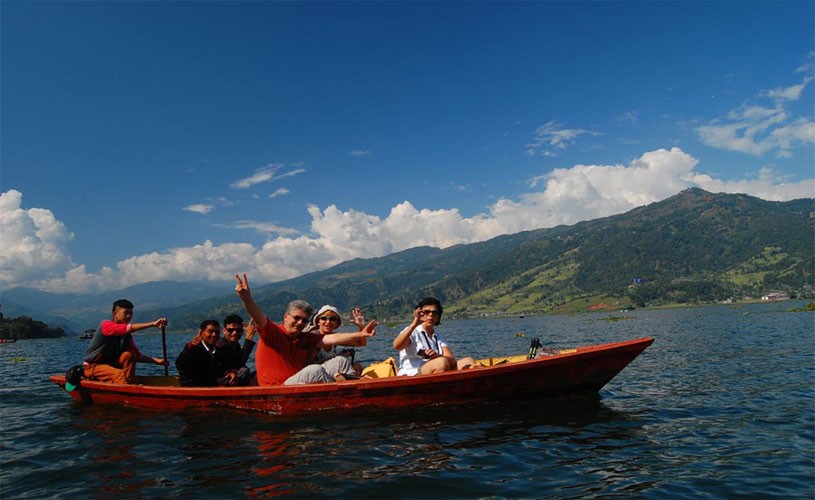 Kathmandu and Pokhara are two of the most prominent cities in Nepal. They exhume cultures of their own. While Kathmandu houses the ancient palaces and their ruins, numerous temples, shrines, and stupa, Pokhara exhibits the country’s modern culture of nightlife amid fascinating natural wonders and remarkable heritage Kathmandu and Pokhara Tour will give you an opportunity to explore the places of great historical importance in Kathmandu Valley followed by a trip to The City of Lakes, Pokhara where you can enjoy natural wonders like lakes and waterfalls surrounded by the Himalaya.

The trip starts from the capital city Kathmandu where you will explore many UNESCO World heritage sites that include temples, stupas, and monuments dating back centuries. Experience different cultures and lifestyles of people from different religions and also taste the local cuisines. While in Kathmandu, we also drive to the hill station of Nagarkot, a small town renowned for the fantastic views of the sunrise and sunset with the Himalayas in the background.

Next, we head to Pokhara, a small city full of natural and historical sites. Here we visit landmarks including Phewa Lake, Davis Fall, Gupteshwor Cave, and other natural wonders. You also have the option to engage in boating, snorkeling, canoeing, paragliding, para-hawking, bungee jumping, zip-lining, and other adventures. Enjoy the fantastic views of the Annapurna and Dhaulagiri ranges among other peaks from the top of Sarangkot. Relax at the Lakeside in the evening with live music and good food. Adventure Club Trek also offers other cultural tour packages in Nepal-Nepal Explore Tour-15 days, Kathmandu Cultural Heritage Tour-2 days, and Kathmandu-Lumbini and Pokhara tour-8 Days.

+ Expand All- Collapse All

Upon your arrival at Tribhuvan International Airport (KTM), you will be welcomed by a representative from Adventure Club Trek. After sorting out your custom formalities (visa and so on), you will be then transferred to your respective hotel in Adventure Club Trek’s private vehicle and giving you some time to freshen up. After this, you will attend an orientation about your trek led by the trekking leader over a welcome dinner. Overnight in Kathmandu.

Our day will be spent visiting different UNESCO World Heritage Sites in Kathmandu.
Day’s Summary
Kathmandu Durbar Square
Also known as the Basantapur Darbar (I did not understandKshetra is one among three Durbar Squares in the Kathmandu Valley. Surrounded by pagoda-style temples of unique architectural structures, the Kathmandu Durbar Square consists of palaces from the Malla and the Shah dynasty. Kumari, the living goddess’ house is also located in the Durbar Square. However, most of the temples in the Square were left in crumbles, and the palaces suffered major damage due to an earthquake on 25 April 2015. As of now, renovation work is underway, and some temples including Taleju Bhawani have already been reconstructed.
Pashupatinath Temple
It is one of the most sacred temples in the Hindu faith and is dedicated to Pashupatinath (incarnation of Lord Shiva as Lord of the animals). The main temple is two-storied and built in pagoda style with a pinnacle made of gold. Built in the 15th century, over time many temples have been constructed around it and at present consist of a total of 518 monuments and temples including the Vasuki Nath Temple, Surya Narayan Temple, Guhyeshwari Temple, and Ram Mandir among others. Open cremation sites along the banks of Bagmati River usually have a pyre or more burning; you can observe the rituals as well.
Swayambhunath:
Also known as the Monkey Temple, Swayambhunath is located atop a hill. Considered one of the religious sites in Nepal, Swambhunath is worshipped by both Buddhists and Hindus. The 2015 earthquake affected the temple’s complex, but most of it is still intact, and re-construction work is going on at a rapid pace.
Bouddhanath:
It is one of the largest stupas in South Asia. It is said that the stupa entombs the remains of Kasyapa Buddha. Boudhanath also suffered damages from the earthquake but has already been renovated fully.

Today, we visit the two remaining Durbar Squares in the Kathmandu Valley. Patan Durbar Square located in the city of Lalitpur consists of the ancient palace of the Malla Kings. Many temples and other monuments located near the palace reflect the unique culture and architectural style of the Nepalese. Some of the major temples include the Krishna Mandir, Bhimsen Temple, and Taleju Bhawani Temple. Next, we explore the Bhaktapur Durbar Square where the culture and lifestyle have remained intact for centuries. The major attractions of this Durbar Square are the 55 Window Palace, Nyatapola Temple, Vatsala Temple, Dattatreya square, Pottery square, and Bhairav Nath Temple among others. Strolling through the streets and narrow pathways, you’ll get acquainted with the history and culture of the place. If you want, you can taste the local cuisine as well. Both Patan and Bhaktapur Durbar Square suffered some damage from the 2015 earthquake. At present renovation works are underway. We then drive to Nagarkot, approximately a 45-minute-long drive uphill, it is known for the view of the sunset and sunrise amidst the Himalayas. Overnight in Nagarkot.

Enjoy the sunrise early in the morning from your hotel. After breakfast, we leave for Pokhara, the ultimate tinsel town of Nepal and a tourist hub. As we are nearing Pokhara, you can enjoy views of mountains including Dhaulagiri (8,167m/26,794ft), Mt. Machhapuchhre (6,993m/22,943ft), and the Annapurna range. Check-in our hotel and rest for the day. In the evening, we can stroll the streets of Pokhara and enjoy the nightlife scene.

Our day starts early as we make our way up to Sarangkot hill to catch a glimpse of the sun rising from behind the Himalayas. This place also offers a spectacular view of the Annapurna and Dhaulagiri ranges in the north and Pokhara in the south. The paragliding spot is close to Sarangkot. You have to inform us prior if you wish to take a paragliding or para-hawking flight. We descend to Pokhara valley and visit the famous landmarks of the city. We’ll explore the Gupteshwor Cave which is almost 3 km long. Inside the cave, you might even have to crawl on all your four limbs. It is the place where a shrine of Lord Shiva, a Hindu God was discovered and has ever since becoming a religious site. Then, we go to see the Davis Falls where the stream flowing from Phewa Lake enters a deep gorge. Next, we head to Phewa Lake, one of the largest lakes in Pokhara where we can do some boating and visit the Barahi Temple located in the middle of the lake. Phew Lake offers many water sports like kayaking and snorkeling. Visit the International Mountain Museum, Tibetan refugee camp, and the World Peace Pagoda also known as Shanti Stupa. Overnight in Pokhara.

Today, we bid goodbye to The City of Lake after breakfast. We’ll follow the same route we took from Kathmandu to Pokhara back. The winding roads along the banks of Trishuli and Marshyangdi River never seem to bore anyone. Upon arrival, you’ll rest in your hotel, and later we can go souvenir shopping. In the evening a farewell dinner will be hosted for you. Overnight in Kathmandu.

Adventure Club Trek will manage a farewell drive to the international airport for your final flight departure. Meeting you and serving you was a wonderful experience over the weeks. We are sure you enjoyed a wonderful holiday in beautiful Nepal. We hope you will remember us in the years ahead.

Note: Your safety is of the utmost concern whilst you are traveling with Adventure Club Trek. We will make every effort possible to follow the original itinerary but we reserve the right to change that itinerary if a segment of it becomes a safety issue. Certain mountain regions are remote, natural disasters can happen, weather conditions can decline and there can be illness or an injury. To avoid dangerous situations we may occasionally have to make changes to the itinerary to ensure everyone’s safety. That having been said, Adventure Club Trek will strive to provide you with the best possible trekking experience and to keep your safety our number one priority. We thank you for your understanding.